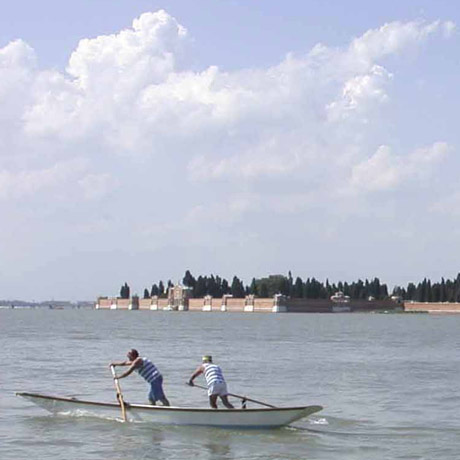 This semi-theatrical work for voice, tuba and ensemble is part of the cycle entitled la Serenissima. By how many pieces it will be preceded is still to be determined, however mappamondo is and will be the last one in the series.

The work features the cemetery island San Michele, situated halfway between Fondamente Nuove and Murano. This is where born and bred Venetians find their final resting place. One also finds the graves of renowned artists, such as Sergei Diaghilev, Igor Stravinsky, Ezra Pound, Joseph Brodsky and Luigi Nono.

Before the island became the municipal cemetery (1870), it was the home of Camaldolese monks (white Benedictines), dating back to approximately the year 1212. Among them was an important fifteenth century cartographer, called Fra Mauro. Around 1450 he created his 'mappamondo' (world map), one of the most remarkable achievements in mediaeval cartography. The original circular map, with a diameter of almost 2 metres, is kept in the Biblioteca Marciana on Piazza San Marco.

Not only does Fra Mauro map all the known countries, but also the nature of the various indigenous people who live there. The map is loaded with descriptions, adding up to some 30,000 words. What is beyond any imagination is that Fra Mauro accomplished his magnum opus without ever leaving the monastery. His map is based on stories and testimonies of seamen, explorers and merchants who all visited him in his cell.The work consists of four movements ('tableaux vivants'), performed without a break.

The island of San Michele is covered in mist. Tinkling bell buoys sound across the laguna. The music cautiously builds a setting. The year is 1450.

Fra Mauro appears and sits behind his desk. During his meticulous work he shares his reflections with us. The map he is drawing forms an endless quest for the truth hidden behind matter. Beyond the physical world he also maps his own mind and thoughts:

“I know in my heart, in the deepest recesses of my person, the map that is about to unfold before me will lay out once and for all the extent of my world. Nor can this be torn from me save the point of death, which stalks me even as I attempt to take possession of the world in all its timelessness."

A boat approaches from afar. An unknown visitor is heading for San Michele, carrying reports of his wanderings.

The visitor turns out to be a travelling musician. He plays the tuba and starts a duet with Fra Mauro. The music is a rearrangement of Merçe o morte, a 'ballata piccola' by the Flemish Ars Nova composer Johannes Ciconia.

The timelessness, referred to by Fra Mauro, becomes reality, as we make an unexpected jump in time. It is 1990, and the travelling musician - as is revealed now - is the Venetian composer Luigi Nono, who has come to San Michele for his final resting place. Like his predecessors he has brought along his testimonies, reports of his travels and discoveries, which however do not relate to the world of geography, but to that of music. Luigi Nono does not use words, but sounds. His motto is 'no hay caminos, hay que caminar': there is no pathway, there is only travelling itself. The piece concludes with an elegy for tuba and ensemble. Fra Mauro listens in silence.

Commissioned by and Written for

the memory of Luigi Nono

The second movement of mappamondo has to be spoken in the language shared by the majority of the audience.

[...] Mappamondo starts from silence, with the gentle stroking of a metal sheet, mysterious beating of the bass drum, followed by hesitating music with big gaps, displaying an unmistakable suggestive power. [...] In the final movement, the most beautiful one, the musical traveller turns out to be the composer Luigi Nono, who has come to San Michele for his last gasps.

[...] Richard Rijnvos is one of the brighter lights in Holland’s post-Andriessen generation: a composer whose focus is not on popular music, but instead on instrumental color. The first work [mappamondo] was new, receiving its third performance in only a few months. [...] I assumed the music would be rich — Rijnvos’ scores always are — and indeed, the final results are remarkably colorful, ever tempered by a joyful abundance of restraint. [...] Listening to [...] Fra Mauro, recite and sing the story of his life and his obsession with maps is almost mesmerizing, due not only to Rijnvos’ control, but also to the grandeur of [James] Cowan’s account. The magnificence of purely verbal imagery is overwhelming, yet the composer avoids histrionics. At 35 minutes, this is a major work that [Roland] Kluttig and ASKO [Ensemble] played with appropriate tenderness and affection. [...] 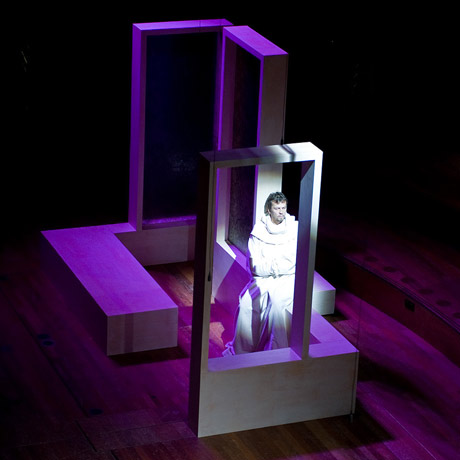