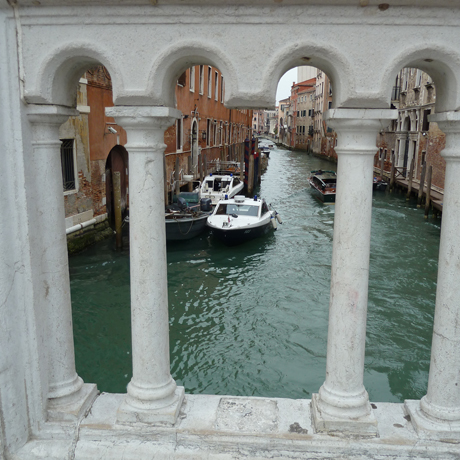 This work - a passacaglia for solo violin and twin orchestra - is part of the cycle entitled la Serenissima, a series of compositions dedicated to the city of Venice and its lesser-known, often dark sides.

The work features the 'Ponte de la Pietà', situated halfway along the Riva degli Schiavoni. Beside this arched footbridge is the 'Ospedale della Pietà': a former orphanage for illegitimate girls, foundlings and newborn daughters of disadvantaged families. Founded in the year 1346, its buildings only partially survive today. Crossing the bridge, babies could be left at the convent via a hatch. One still finds a plaque on the church threatening with damnation parents who tried to pass off their children as orphans.

By the late seventeenth century, the Ospedale operated a renowned music school in addition to its orphanage. In the autumn of 1740, the Venetian composer Antonio Vivaldi - having served as 'maestro di violino' at the Ospedale for almost forty years - crossed the Ponte de la Pietà for the last time, never to return to his hometown. He set off for Vienna, hoping to work for Charles VI. However, the Habsburg sovereign died unexpectedly, and no one else in Vienna was interested in employing the "Red Priest". By the end of July the following year, Vivaldi himself died. He was accorded the cheapest possible funeral and was buried in a pauper's grave.

Richard Rijnvos is hot. Earlier this week the announcement was launched that the composer will act as one of out three residential composers of the Royal Concertgebouw Orchestra in the next few years. During the current season the Dutch composer is resident at the ZaterdagMatinee concert series and the Netherlands Broadcasting Music Center. As a result, his new work, entitled ponte de la pietà, scored for violin and twin orchestra, will be premiered in the Amsterdam Concertgebouw this Saturday afternoon. [...]


[...] Rijnvos formidably masters the art of structuring, whilst in addition - again, just as with Beethoven, and all those other composers that really matter - there is so much fantasy in the details and instrumentation, that it surpasses being a box of blocks.

The structure of ponte de la pietà is so logical, that it threatens to become predictable. However, the strength of the work is that, right on the moment you are sure what is to follow, it changes tack. At the end, sliding in beautifully slow, a lingering melody in brass blooms, one that seems to appear out of nowhere, but instead springs perfectly from the narrative, before concluding it. And again, it is not only done well, but it also contains a beautifully emotional - tragic - weight.