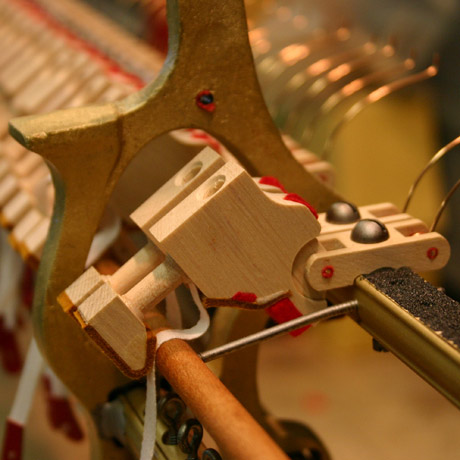 The composition by Stockhausen is widely known because of the unconventional look of its score: arch-shaped staves plus a transparent strip with additional notes. The position of the transparency is free and decided upon by the performers. Thus the form of Refrain differs substantially with each performance.

In the year 2000 Stockhausen created a new version of the piece, entitled 3 x Refrain 2000, dismissing the unpredictable parameter of the strip to the bin. However, the strip has now become part of a recycling programme: its notes, trills, tremolos and glissandi cast reflections on the score of Riflesso sul tasto.

At the Purcell Room, the Ives Ensemble […] presented an evening of mostly recent music by Richard Rijnvos (b.1964). [His] three works, very distinct, attested an ingenious musical mind. Riflesso sul tasto, for three players (2007) and Riflesso sullo spazio, for seven players (2019) are respectively the first and latest of his series of constructive "reflections" on 20th-century classics. The first, 14 minutes long, is a commentary on Stockhausen's "Refrain" (1959) and deploys the same tintinnabulatory trio of vibraphone/glockenspiel, celesta and piano to felicitous, vigorous effect. The second was a 40-minute, darker, rather minimalist study on Schoenberg's Op 29 "Suite" for clarinets, strings and piano – and unusual septet scoring, now endowed with a completely new character.

[...] Riflesso sul tasto is the first in a series of camponion pieces: music with the same scoring as a classic, in this case Refrain by Stockhausen. Rijnvos sets out a track of fast grace notes, occasionally growing into sprinkling fans of notes. Tone repetitions hammer obstinately, whilst high notes gleam with changes of colours and intonation. [...]