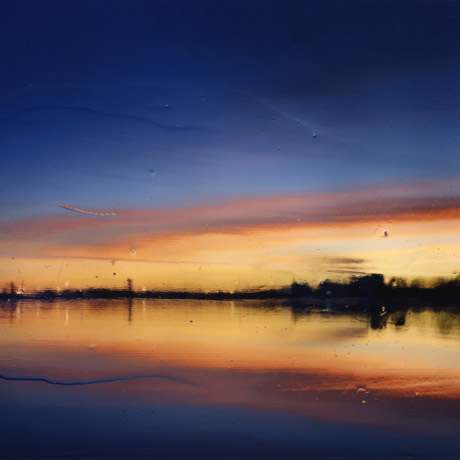 Riflesso sull'acqua ('sheen on the water') is part of the Riflessi series, which consists exclusively of companion pieces: each Riflesso explores the same exceptional scoring of a classic from the last century.

Riflesso sull'acqua is a companion piece for The Swan of Tuonela (1893), in which Jean Sibelius depicts the transcendental image of a mystical swan, swimming around the island of the dead. It makes use of the exact same instrumental combination: English horn accompanied by a symphony orchestra that lacks flutes, clarinets, trumpets, and tuba. The reduced woodwind section consists merely of one bass clarinet, two bassoons, and a single oboe whose subtle role it is to “amplify” the soloist. The string orchestra is heavily subdivided.

Like The Swan, the English horn has a distinct solo part, yet Riflesso sull'acqua is anything but a concerto. The characteristic melancholic sound of the solo instrument comes from within the orchestra, and travels slowly behind the strings, from right to left, as if it were a celestial body tracing out its elliptical orbit. Occasionally the oboe in the orchestra plays in unison with the English horn, but most of the time it act as an echo or aural 'riflesso'.

The tone poem by Sibelius - master of the imperceptible transition - opens with a harmony in the lower register of the orchestra. It then rises during the first four bars, as if evaporating. The same happens in Riflesso sull'acqua. However, the gradual transit from dark, earthly chords to luminous, heavenly ones takes place not over a few bars, but over the entire duration of the piece. More and more the harmonic scope ascends and its ripple continuously multiplies.

The seven positions of the English horn are mirrored by the seven brass players. The four horns and three trombones are not on stage, but form their own curve amidst the audience. Their contribution is of an economical nature, reminiscent of the Finnish master, as they perform exclusively between the solo passages.

Towards the end of the piece an eerie illusion occurs: a white reflection emerges on the surface of the water, as if that of a swan, but the image is distorted and vanishes gradually.

the memory of Mark Weil

[...] the work breathes a calm persistency, with stationary textures and an orchestral shine, above which the cor anglais laments introvertly. [...]


[...] Spatial quality is the key element in this quiet, gorgeously static piece, in which gradually all low sound disappears, causing the music to float, as contourless reflections in water under a pale morning sun, and becoming more and more rarefied. [...]